skip to main | skip to sidebar

Well, while browsing through the various thread of a forum I frequent I saw a title that actually made me rather... pleased. A thread about the current future of a game series titled "Soldier of Fortune".
Based slightly of off a real life soldier of fortune, John Mullins (which the game does use his name and likeness) it places you in the boots of a modern day merc.
Now, the original SoF was released back in 2000. And it raised a bit of controversy upon it's announcement. Coming from developer Raven Software as a brand new IP and spotting a feature never before done in a FPS... locational based damage modeling, or their Ghoul system. Which simply means... you have a shotgun... you shoot a bad guy in the leg... the leg comes off.
The game was very violent and graphic for it's time, and since it was the first of it's kind, it was extremely controversial. Being able to sniper in and actually blow some one's head off was a bit much for some.

But, what saved the game form being banned and torn apart by parent groups... it featured a parental lock out system. An adult could set the game up with a password, lock out all the gore and blood... and leave SoF as a basic FPS.
Also, the story was a bit campy and the gameplay felt a little arcade like... taking away from the realism.

But, in 2002 Raven revived the franchise with Solider of Fortune II: Double Helix. Reprising the role of John Mullins Raven dropped gamers back into the ultra violent world or a modern day soldier for hire.
But SoF2 got much more negative press and a lot more controversy than the first game ever did. Why? 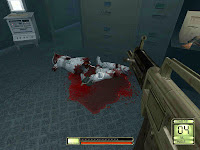 SoF2 was much more graphic, more violent... and much more detailed. This time around, if you shoot somebody in the face with a sniper rifle... it depends on where you shoot them. In the first game a head shoot would either remove the head completely... or leave a bloody bullet mark. This time around you can shoot out eyes, blow off a jaw... blast off a piece of their skull and see the brain inside.
Raven upped the Ghoul system to new heights. Allowing for a much more realistic looking game, and this time it featured a bio terrorism based plot, and a slower paced game play... all in all they removed the arcade feeling and made everything seem more real.

There, a brief rundown of two of my favorite shooters from my past. But, to my joy, as I read... a third game in the series was already in development and was looking to be set for a November release.
But my joy was quickly slapped down as I read Raven was not making the third title. Instead they had sold the rights to Activision (their publisher), and Activision was now heading the project completely.

The game is going to be published by Activision's Value Label which produces budget titles. But, there is hope... the third SoF title will be developed by Cauldron, the company responsible for the cult favorite shooter Chaser.

More details will be released after E3 in July, where the game will be shown for the first time. After more details and media are shown for the title I will make a better judgement. But right now... I'm slightly excited, but a little hesitant. So we will see what happens, I'll update as news becomes more apparent.
Posted by Damien_Azreal at 4:49 PM

Damien_Azreal
Kansas, United States
I've decided to do this blog for a way to vent and get my views out there. I'm going to use this as a way for me to share my opinions on the gaming community, review games and vent. This is my personal view on the PC gaming industry and the people in it. For game review purpose my PC system specs are, WinXP Home Edition SP2, AMD64 x2 4600+, 2gb DDR2 Ram Corsair, GeForce 8800GT 512MB PCI-Express, Creative X-FI ExtremeGamer